Randy Pausch was a professor of computer science at Carnegie Mellon University, who learned that he had pancreatic cancer and was given a terminal diagnosis: "3 to 6 months of good health left". He gave an upbeat lecture titled "The Last Lecture: Really Achieving Your Childhood Dreams" in September 2007 which became a popular YouTube video. In it, he had many good pieces of advice, including this: 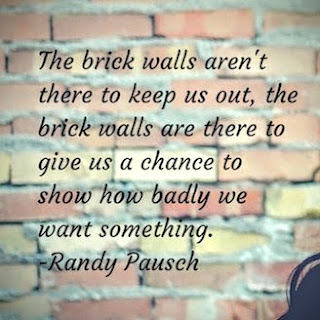 People are asking me, more and more, if I'm ready for my 100-mile long Oregon trip. The answer is, Yes. I feel like I've done all of the things I could possibly do to get myself ready in terms of acquiring the correct gear, preparing myself physically and mentally for the challenge ahead. Now, we just have to get there (in 15 days time), and start taking those first steps.

The excitement of it all is linked to the prospect of unknown problems, and having the ingenuity to solve them. Also, it'll be 11 days of minimal exposure to electronics and the Internet; seven days of sunshine and fresh air (although, it is Oregon, so it might rain!?)

Despite the little blip in the downward path of my weight loss, I'm just as determined as ever to have a successful month of May, and get back on track. I'm going to find a way around the wall, or over it, or under it, or through it - whatever it takes.
Posted by Chris at Tuesday, May 03, 2016

Back in June 2015, I had made a decision to improve my health and lose weight. At the time, I weighed 405 pounds (having peaked at an incred...